“Unbelievable!  In this country there is no gasoline, but cars are all over the road.  There`s no food, but everybody is cooking dinner.  They have no money, but everybody is dancing and drinking rum! “ – Cuba Junky 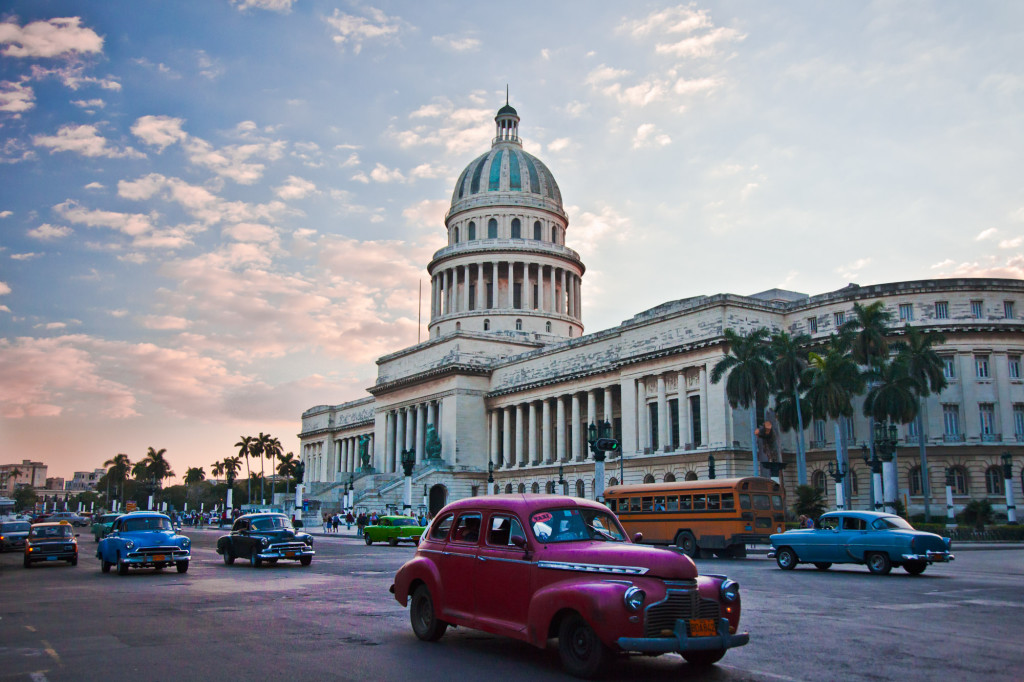 If you have no interest in rum, cigars, old cars, revolutionary history or exploring the coral reefs and pristine beaches of the Caribbean, what then, would intrigue a visit to this beautiful island?   Actually, if not one of these things inspire you to go, then it will be most challenging to convince you otherwise.   However, Cubans have a passion for life which is easy to relate to and once you experience that, you will most likely be hooked too.

Cuba is a country that should be experienced and not a destination one simply ticks off a bucket list.  I wanted to celebrate my 40th birthday on Cuban soil.  The plan was to drink mojitos, smoke Monte Cristo cigars and salsa in the heart of Havana!  I wanted to live and breath the culture and that meant lingering for a while, forgetting about time, which seemed easy to do on an island that time forgot. 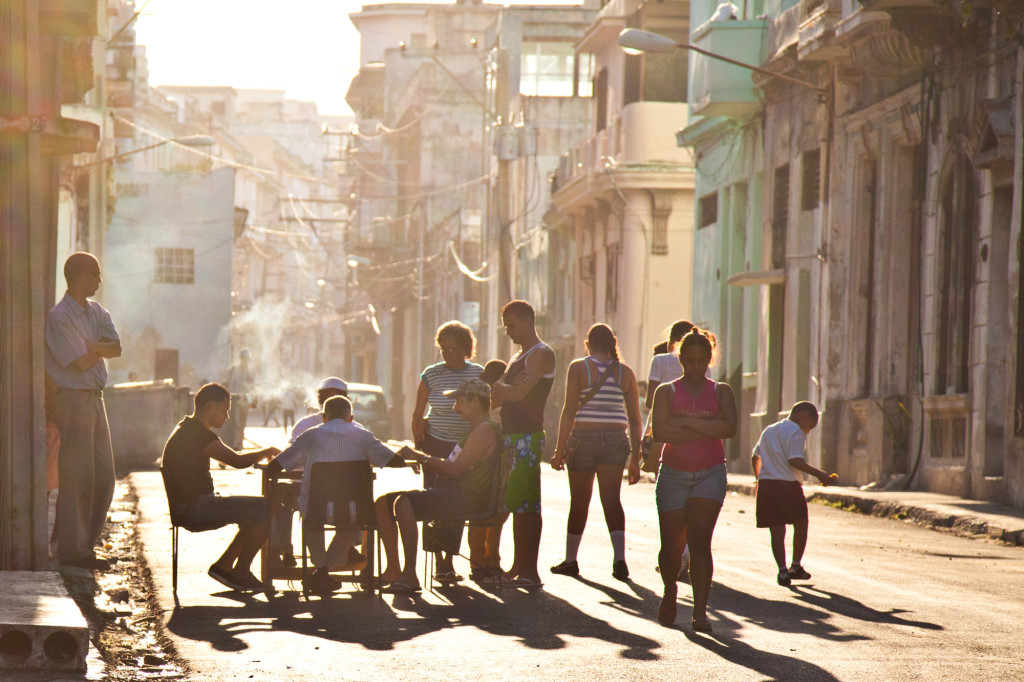 Real Cuban culture can only be experienced if you stay with local people in what is known as casa particulares.  I was fortunate to have landed what I consider prime accommodation and that, at the 11th hour and by pure luck.  Casa Marina is situated opposite Parque Antonio Maceo (a very distinctive landmark) in Centro Habana and a block off the Malecón (Havana’s seawall).  The apartment building is dilapidated and does not spark much enthusiasm.  I was greeted at the entrance by a short woman with a friendly smile, dressed in shorts and a t-shirt to welcome me into her home.  I would soon find out that although there are lifts in Cuba, they seldom work as there are no parts to repair them.  Once we reached the 3rd Floor, 6 flights of stairs later, Clarita opened the door to her and husband Orlando’s apartment.  The interior was large and modern with beautiful views over the city and the ocean. 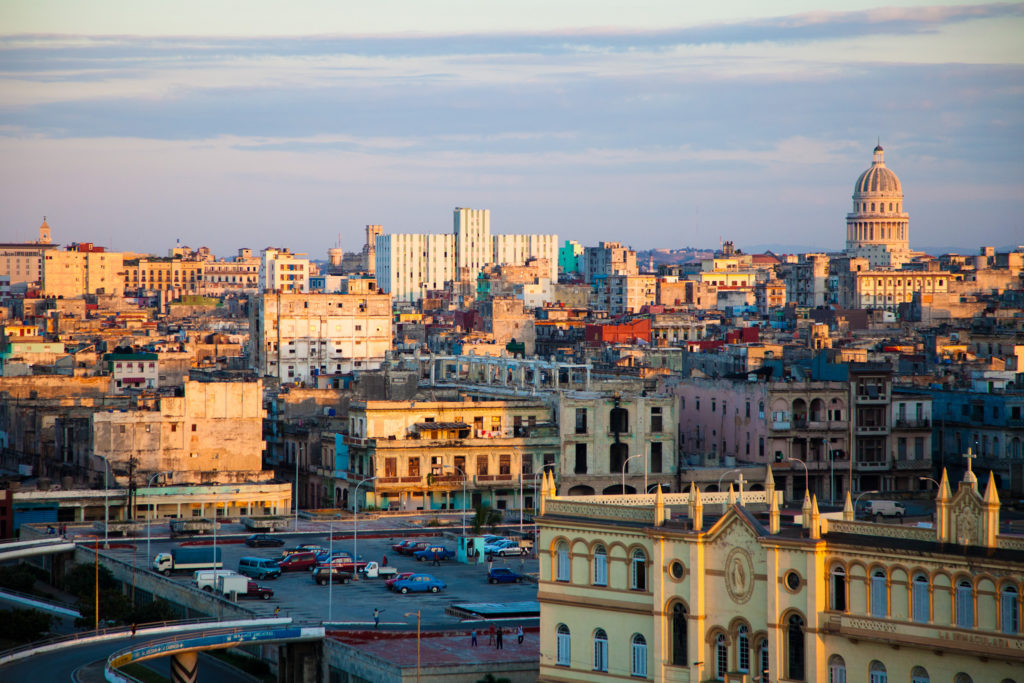 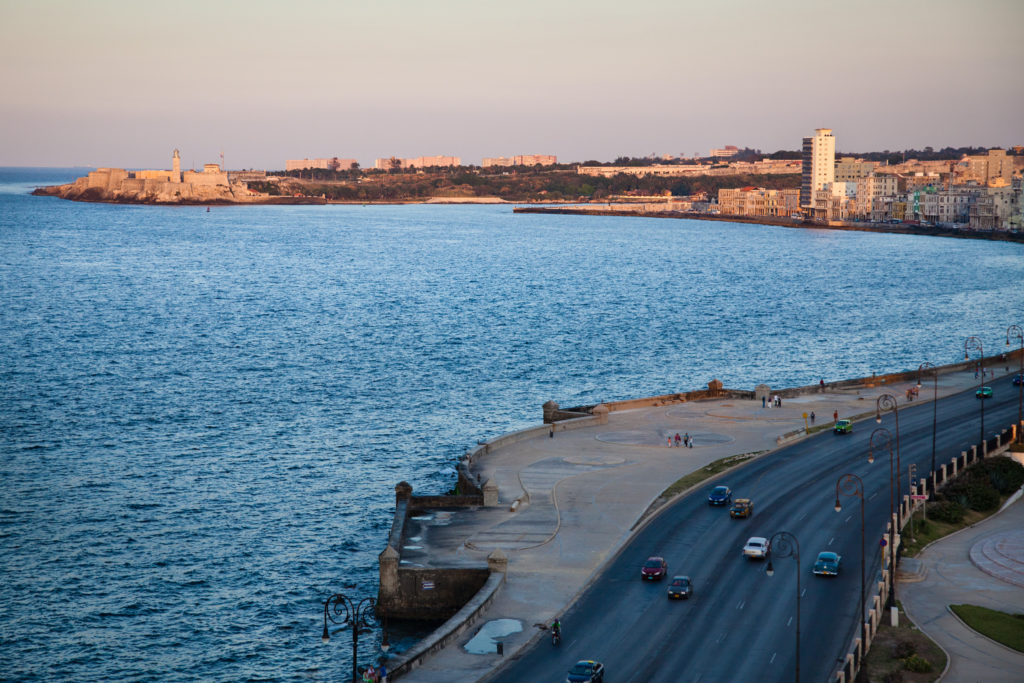 The romanticism that is Cuba can only be found once you venture outside the touristy Habana Vieja.  Only then will you encounter the Cuba depicted in movies like The Lost City.

Most of the casa particulares operate in a close network of friends, so one owner is more than happy to refer you to the next one and even book ahead.  In my case, Clarita of Casa Marina referred me to friends in Vinales, Trinidad, Santa Clara and Santiago de Cuba and not once, was I disappointed.

Visiting a tobacco plantation is almost obligatory and the best way of experiencing this is by walking through the fields before sunset.  Sitting on a rocking chair amidst the plantations, sipping rum and smoking a hand-rolled cigar is as close as you will get to being a local. 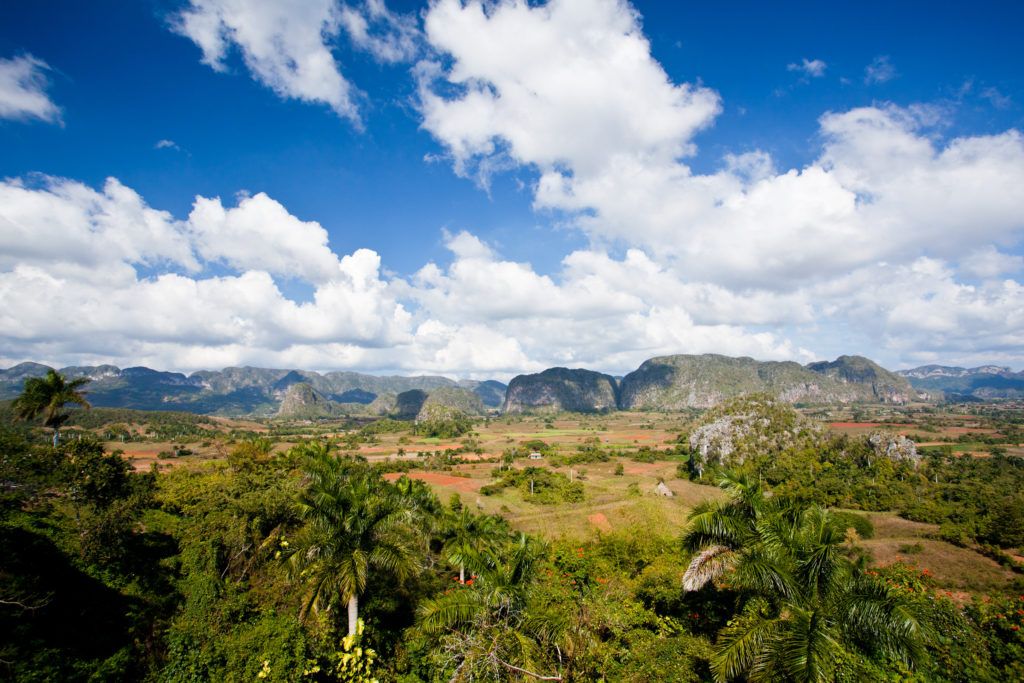 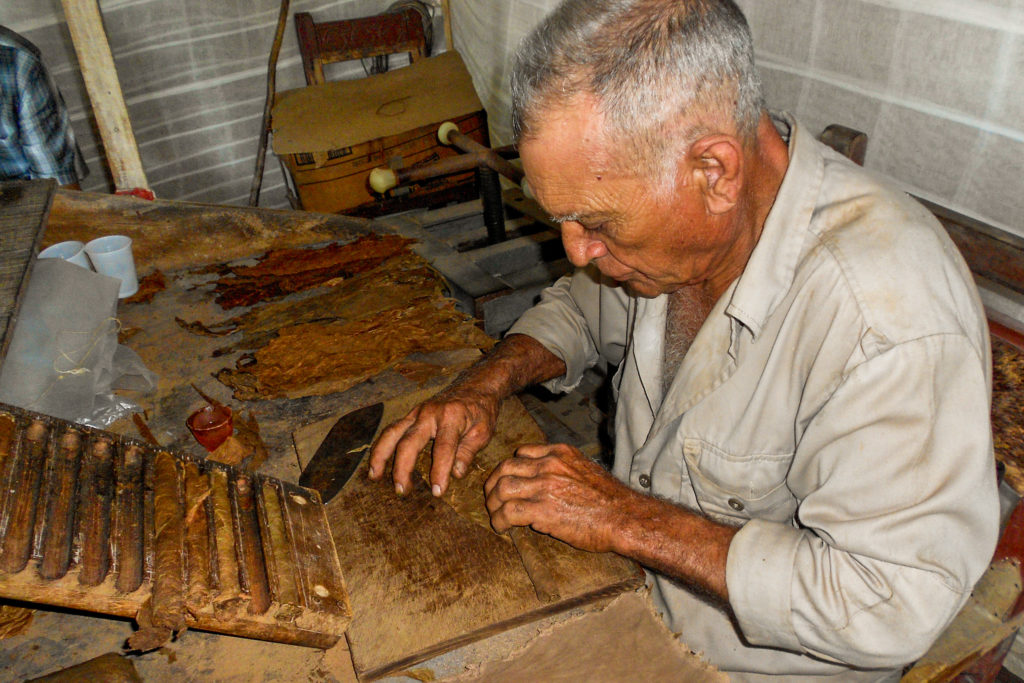 Trinidad de Cuba is one of the island’s gems and the gateway to all things fun – music, dancing, hiking, swimming, snorkeling…  I spent a few days here living the life.  A perfect day in Trinidad de Cuba bears a strong resemblance to scenes from the The Rum Diary by Hunter S Thompson. 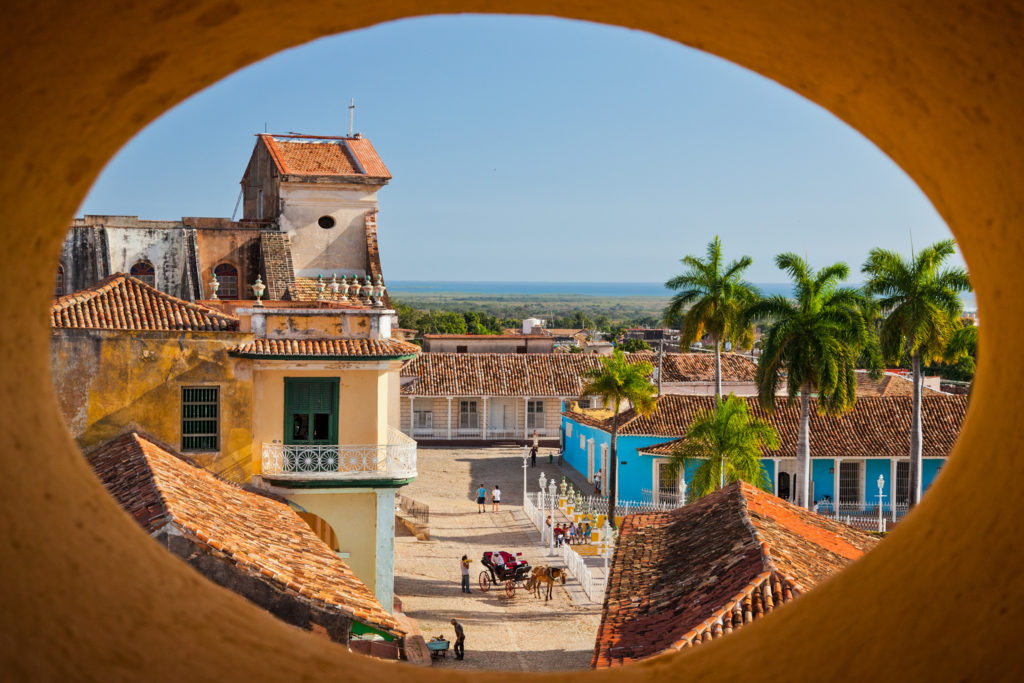 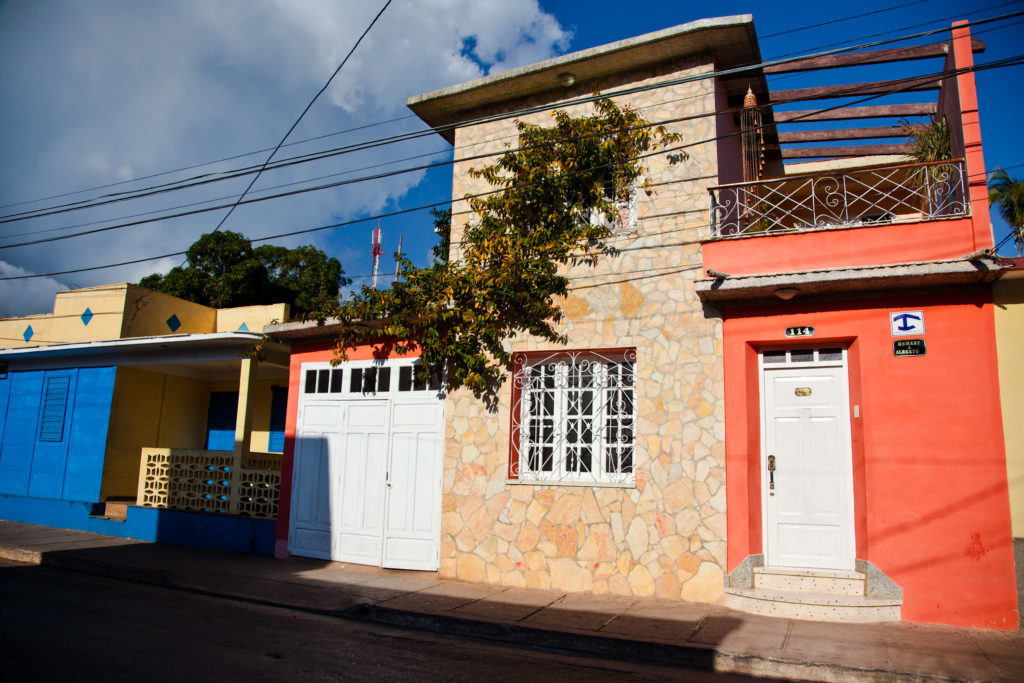 I stayed at Casa Osmary y Alberto which is close to the town centre.  I would wake up at leisure and enjoy the breakfast spread in Alberto’s lush courtyard – fresh fruit, juice, omelet and toast.  Walk into town and get a bus to Playa Ancon or just group with other tourists and split the cost of a taxi. 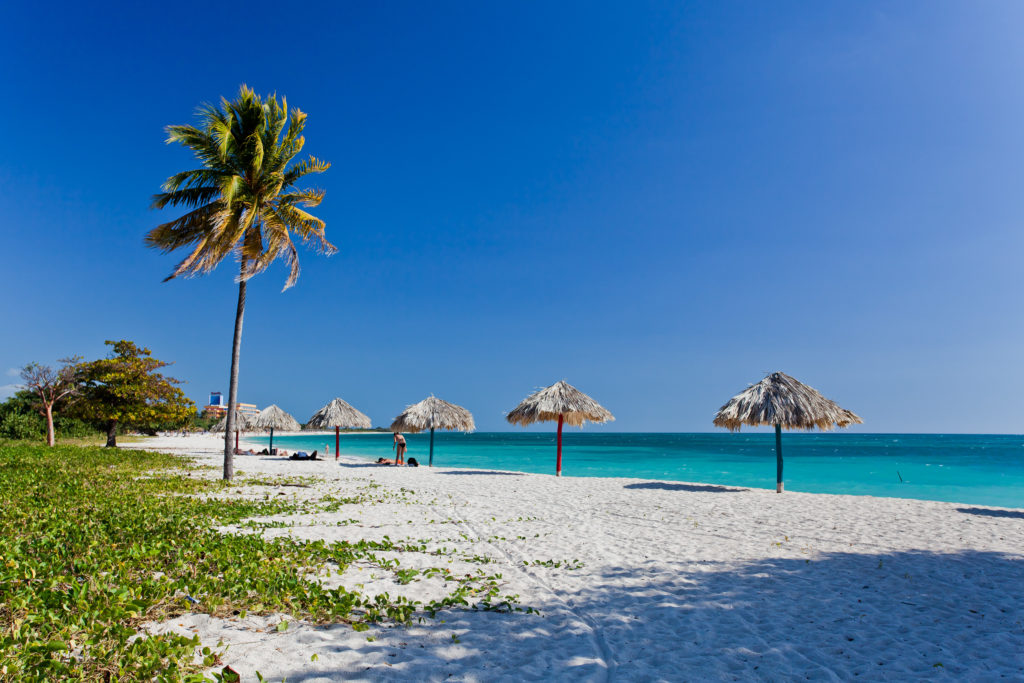 Playa Ancon is described as one of Cuba’s most beautiful beaches and yet totally underrated compared to Maria la Gorda and Playa Santa Maria.  Around 11h00, I would order my first mojito while basking in the sun and every now and then, cool off in the indigo water of the Caribbean. 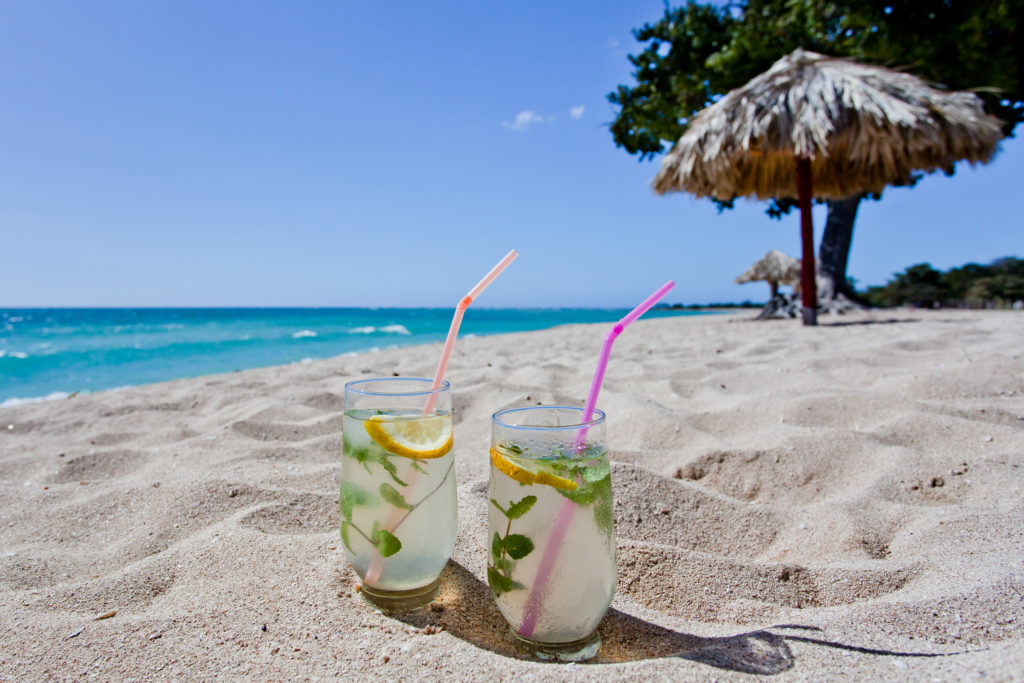 Around 16h00 I would make my way back to Alberto’s.  After a refreshing shower, enjoy last night’s left-over rum as the sun sets in the now familiar courtyard.  Working up an appetite for the chef’s 4-course gourmet meal accompanied with Chilean red wine.  Stroll to the Casa de la Musica at 21h00.  Buy a bottle Havana Club Reserve Rum while being entertained by a variety of live music and salsa until midnight.  On the way home, buy a freshly made ham, cheese and lettuce roll to soak up a bit of the rum and stop en-route to capture a night scene in the empty streets of Trinidad.  The night watch opens the door and I make my way to a clean bed where my body rests until tomorrow… 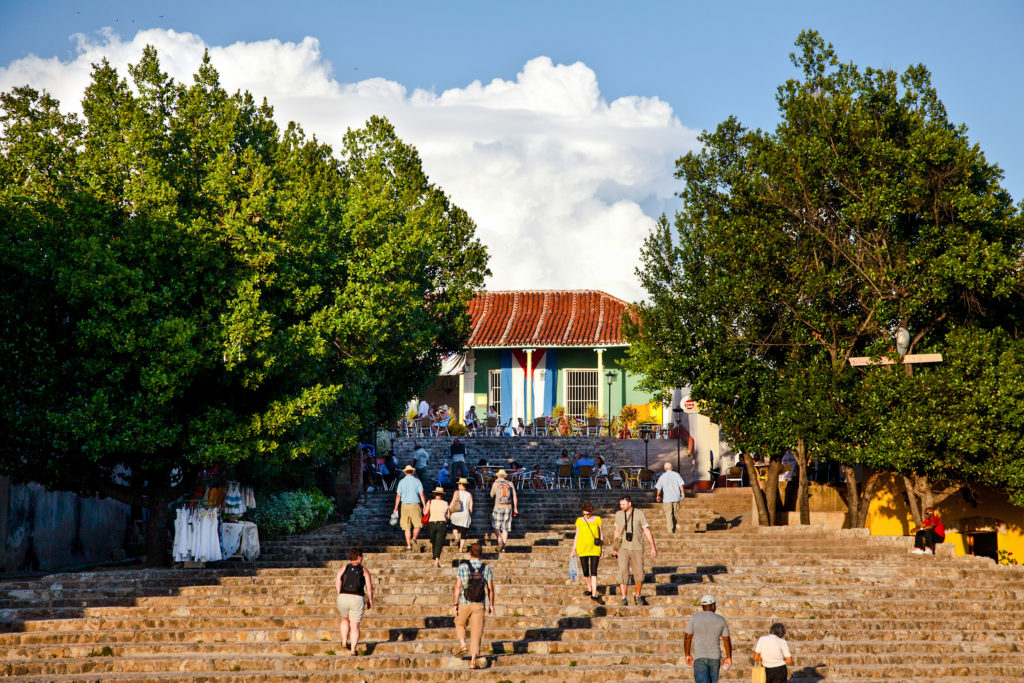 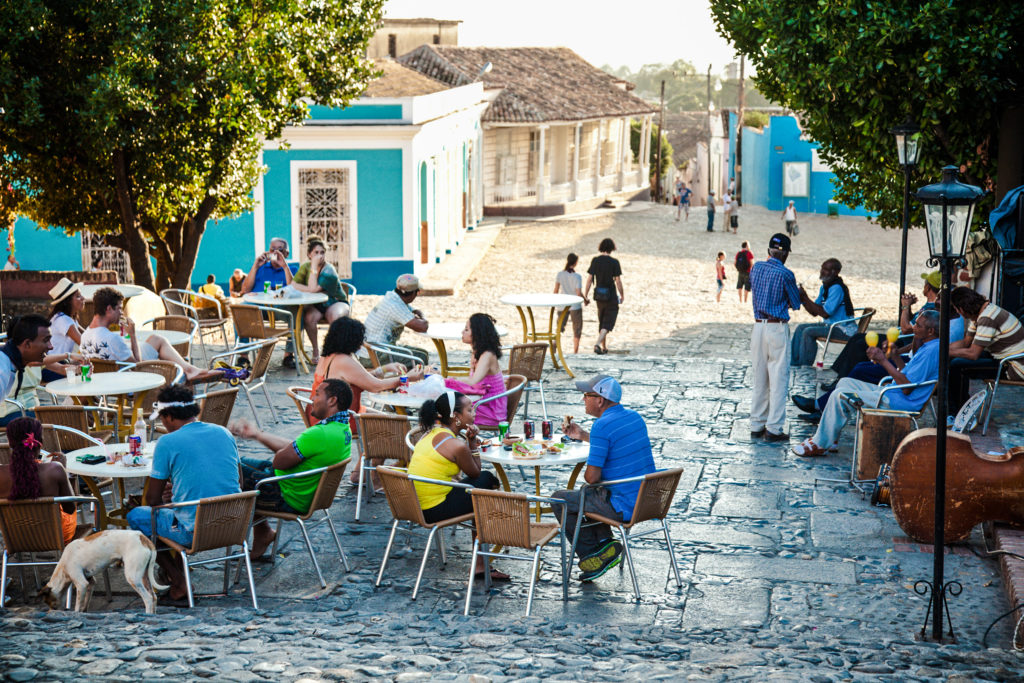 Nothing gets you going like Cuban music.  I absolutely love it!  The biggest frustration is when your feet starts tapping to the music and your body starts moving and you are still in a chair!  What I love about the Cuban culture – jinetero’s or not, they are truly warm and giving people.  They take joy in dancing with the tourists and showing them the ropes – no strings attached.

I met a Swedish lady in Trinidad at the Casa de la Musica.  She told me how it was her 3rd visit to Cuba in 2 years.  Most Europeans are only after perfect beaches to escape their cold winters, but her agenda was different.  Her sole mission is to dance.  Dana says that she dances on average 6 to 8 hours a day.  She joins up with dance groups or sources a private salsa teacher with who she spends a good 3 hours in the morning learning and dancing.  In the evening she follows the best salsa rhythm and alternate between Casa de la Musica and Casa de Trova.  This inspired me.  Therefore, naturally, one of my highlights was learning to salsa the Cuban way. 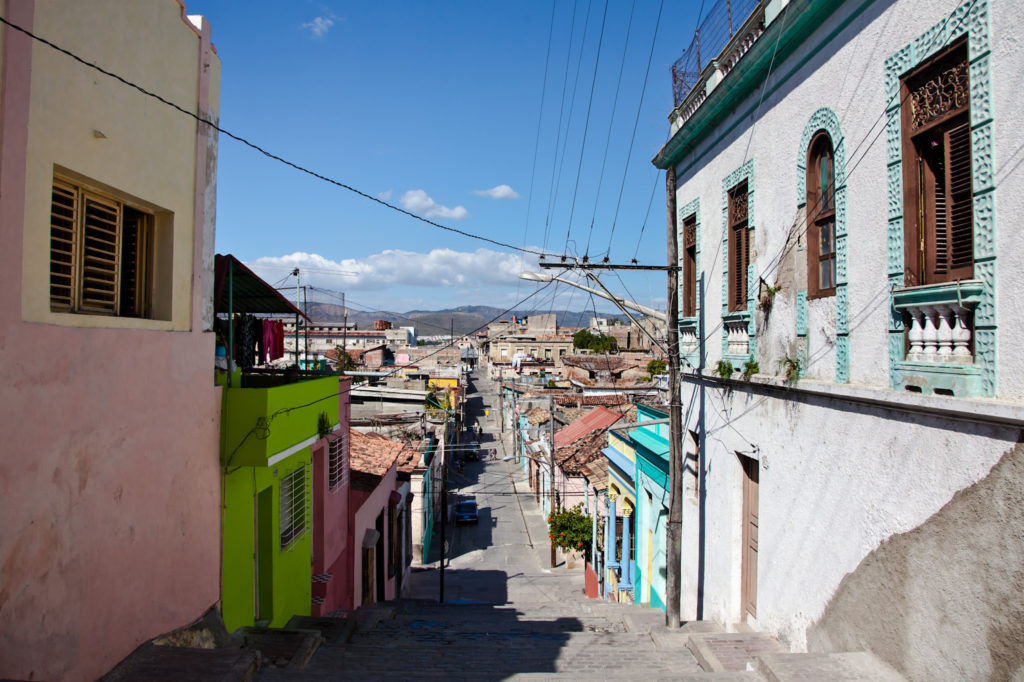 In Santiago de Cuba my quest was to find a private salsa teacher.  I stayed at Casa Marlen on Avenue Garzon which also has a courtyard.  Marlen was as lovely and resourceful has her friend Clarita in Havana.  She introduced me to Yoaris, a Profesor de Baile who would meet me every afternoon at 16h00.  Marlen’s courtyard would then transform into a salsa studio where I would learn how to move the Cuban way.  Once you have had the privilege to dance in Cuba, salsa will change for you, forever.  Yoaris kept saying “apprentice rapido, apprentice rapido”.  I suppose if you really love doing something and your heart and soul is in it, then the result will most likely be that of a fast learner.

In the evenings I would venture to Casa de Trova, where Ry Cooder discovered the legendary members of the Buena Vista Social Club band and introduced Cuban music to the world.  Here I would put my learning into practice and sway to the rhythm of the music. 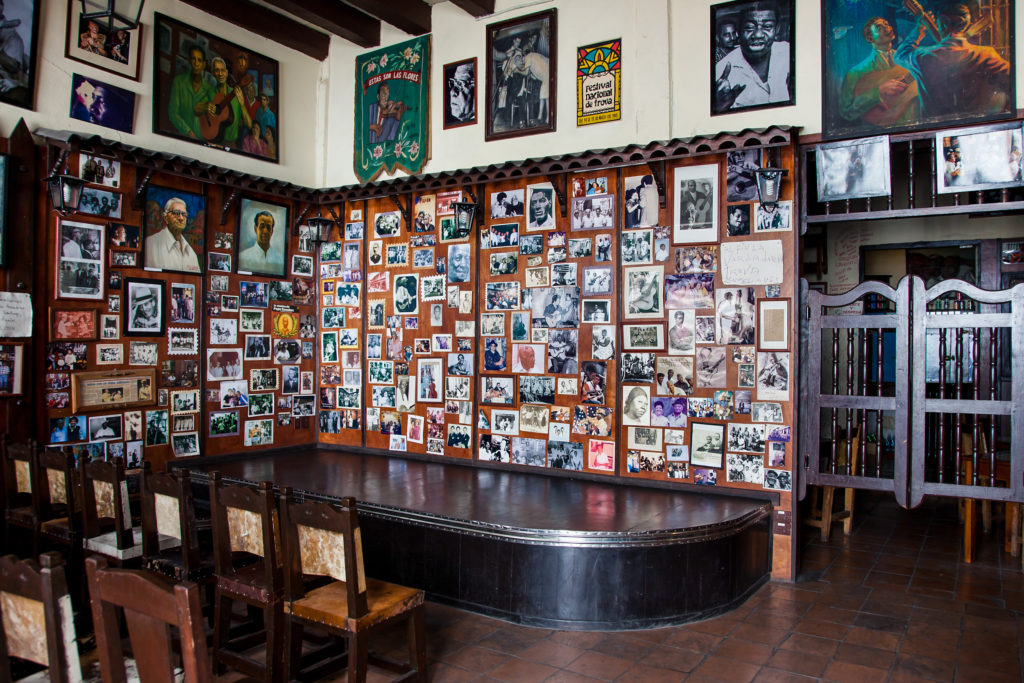 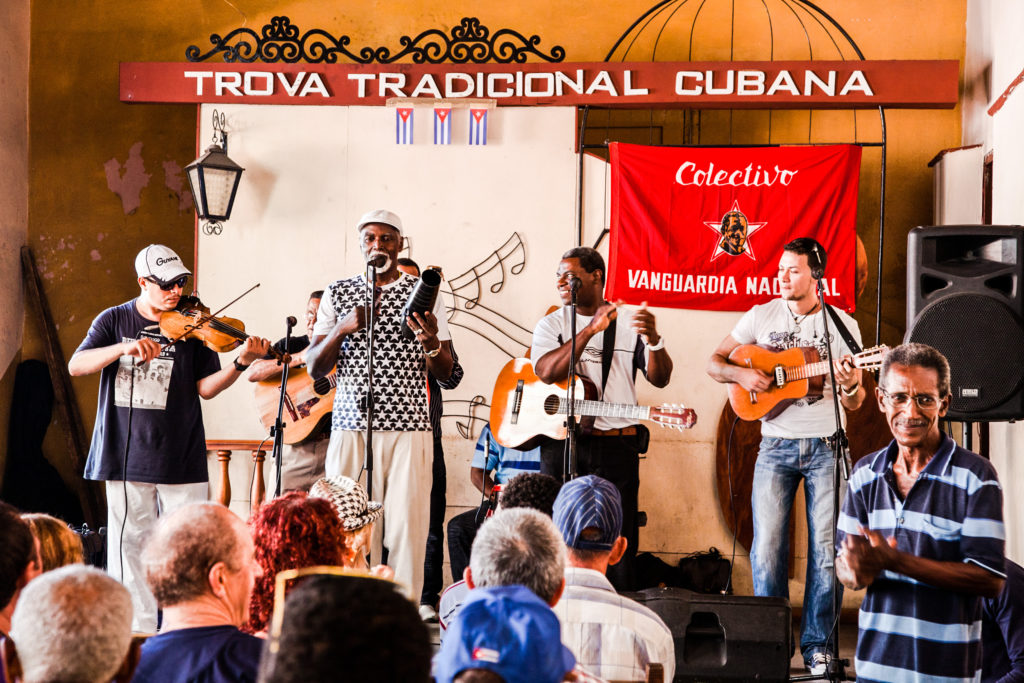 In Cuba, Che Guevera and Fidel Castro are as important as Jesus Christ.  It is not uncommon to see large portraits of these icons hanging next to one another and sometimes, on a rare occasion, the beloved classic Chevy will be parked in the lounge too. 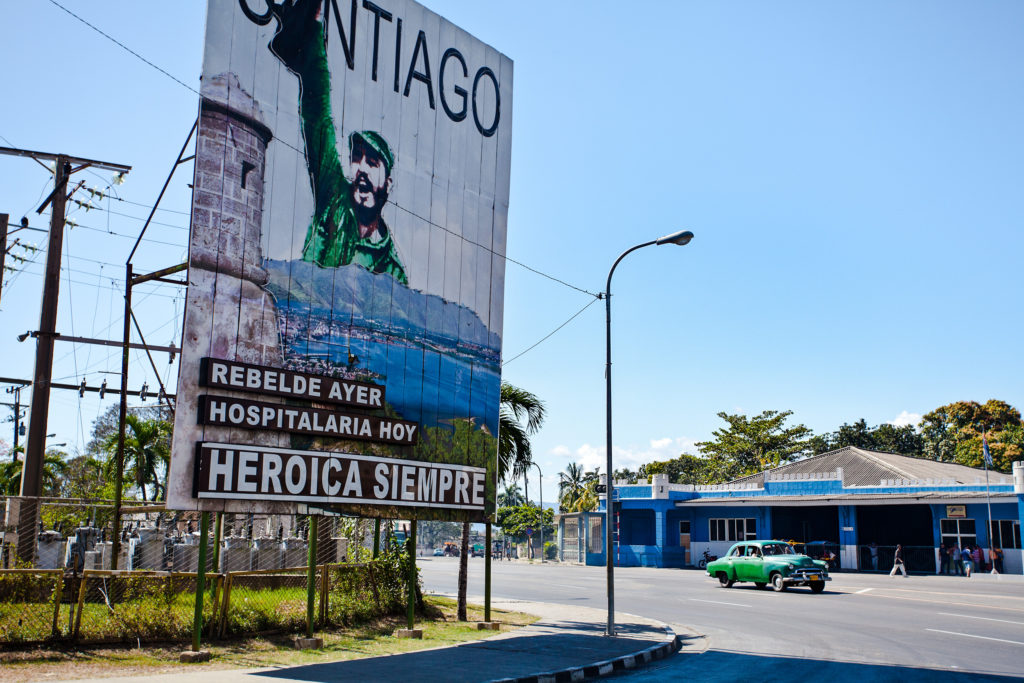 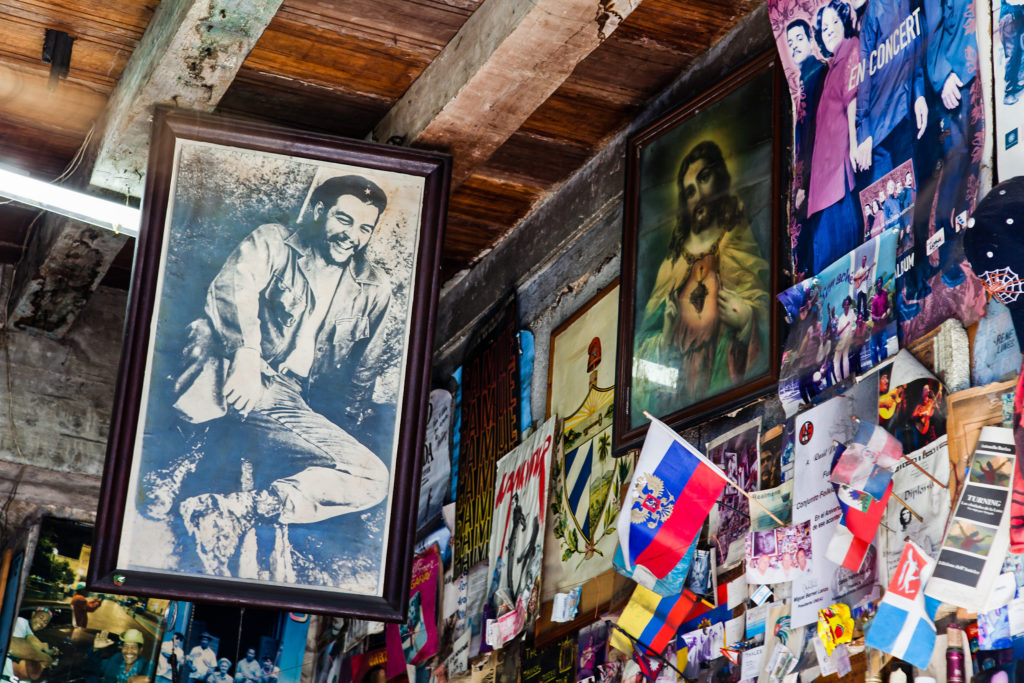 Cuba is intoxicating, even in a state of sobriety.